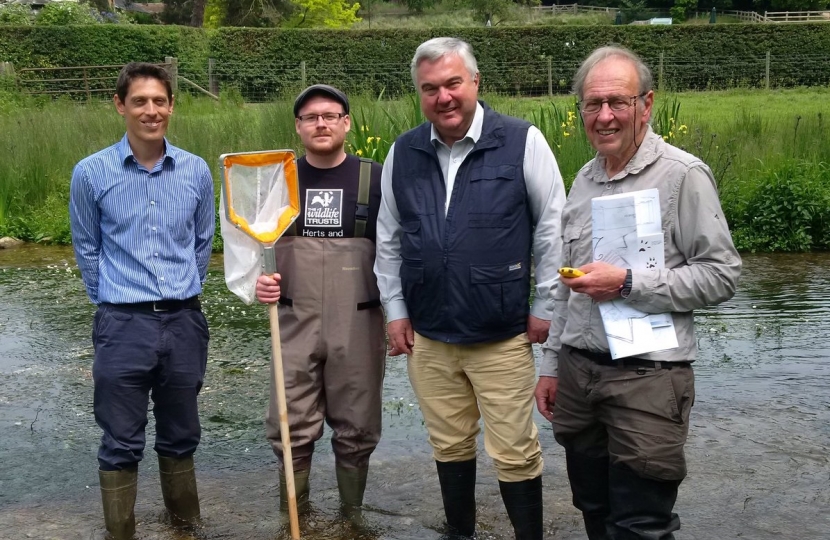 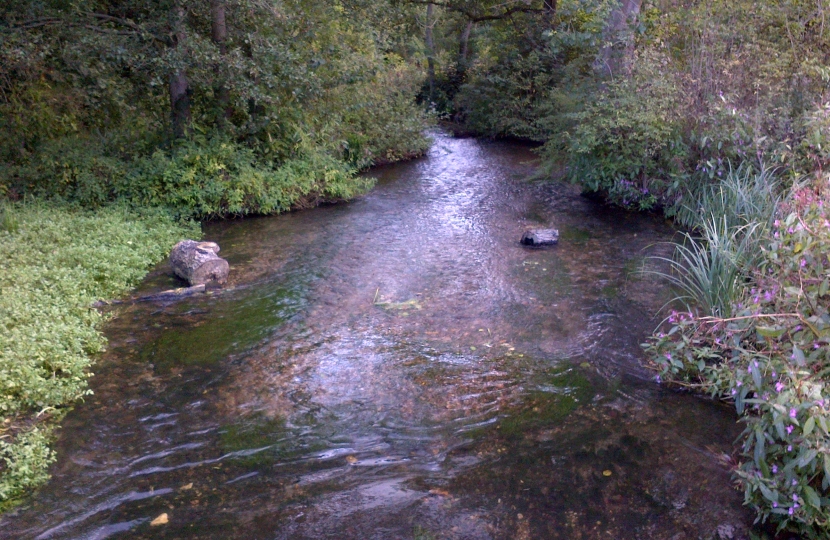 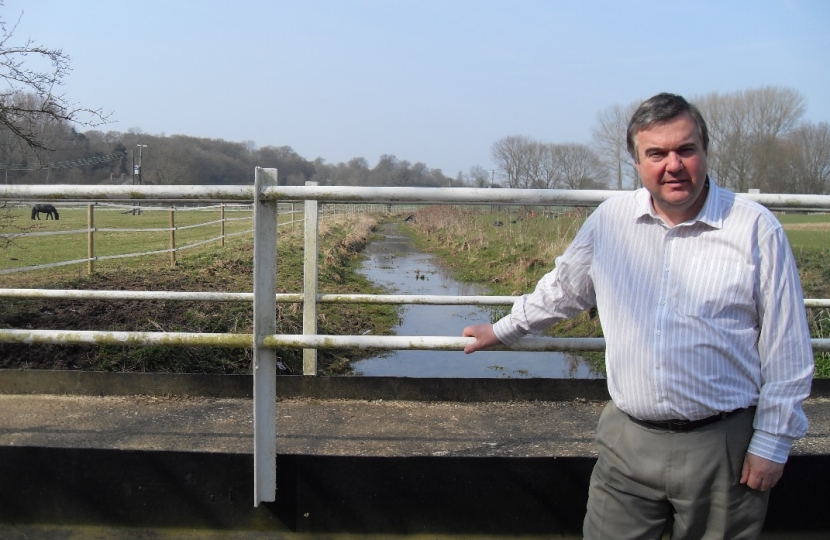 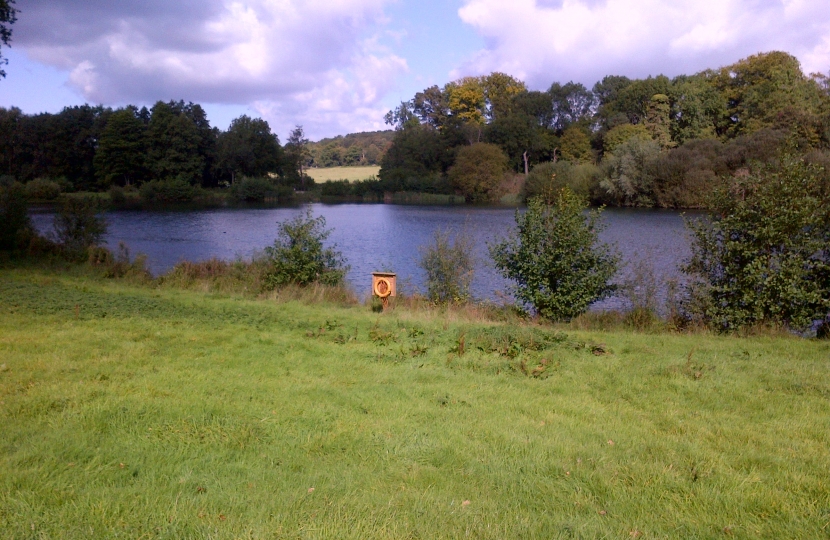 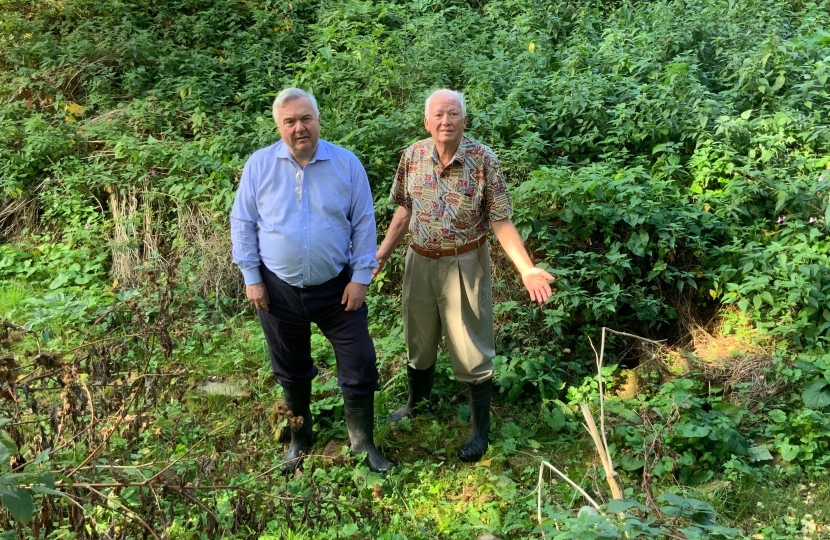 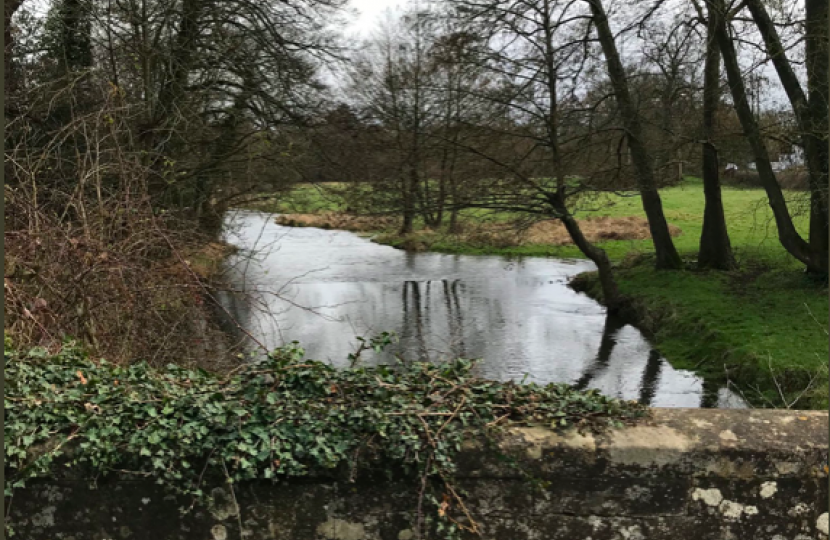 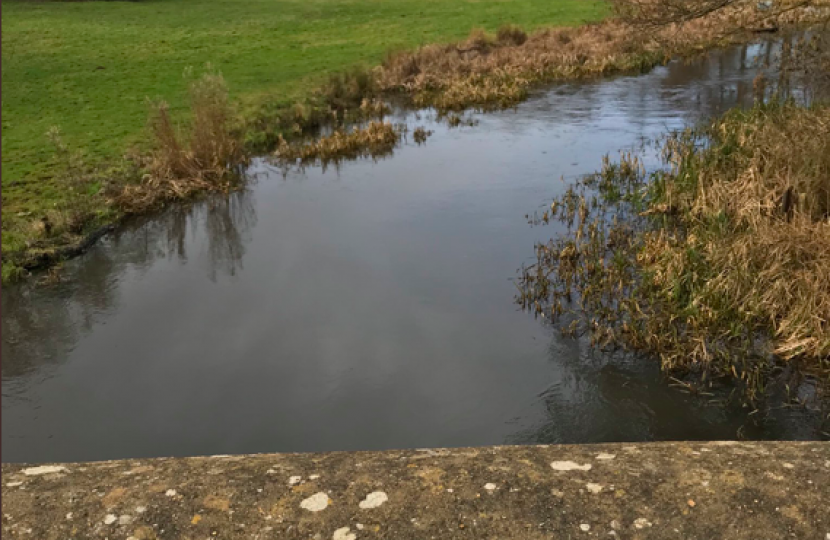 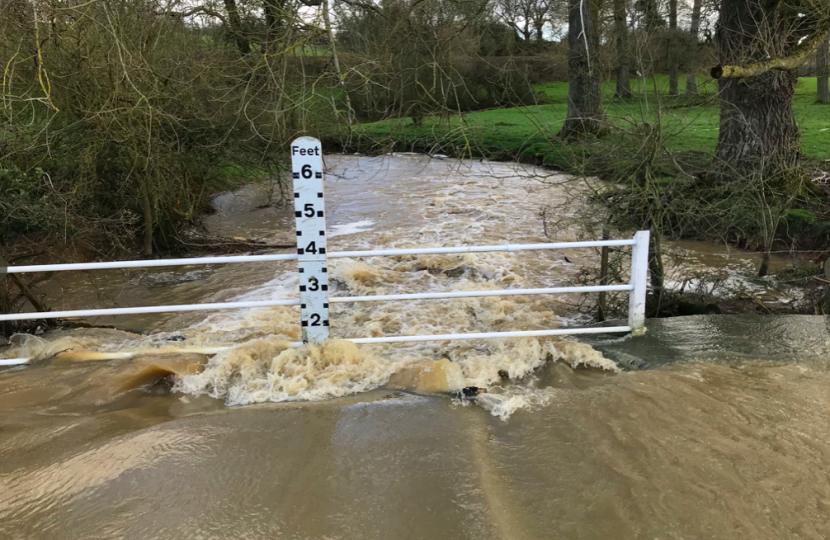 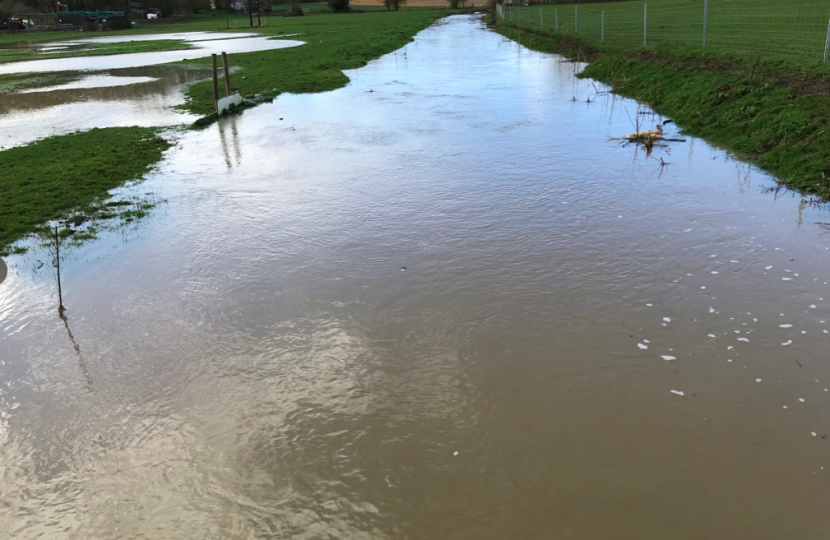 Amongst many important issues which I am interested in campaigning for in North East Hertfordshire is the promotion of the preservation of chalk rivers in the constituency. The Ash, the Beane, the Ivel, the Mimram, the Quin, the Rib, and the Upper Rhee are all within the constituency, and these rivers regularly face the possibility of drying up over the summer months - harming local wildlife, flora, and fauna. This is an extremely important issue.

Things we have done so far

October 2020 - The Chalk streams APPG has upcoming meetings with Charles Rangeley-Wilson of CRAG and Minister Rebecca Pow of DEFRA. This is a good step towards tackling the issues affecting our Chalk Streams.

October 2020 - The Sewage (Inland Waters) Bill 2019-21 has its Second Reading in the House of Commons on 13th November 2020. The Bill places a duty on water companies to ensure that untreated sewage is not discharged into rivers and other inland waters.

I know how important the 8 Chalk Stream rivers in the constituency are to North East Hertfordshire residents. They contribute significantly to the health of people who use our rivers for recreation and well-being, and as vital habitats for wildlife. It’s shocking to read that 1058 hours of sewage was discharged into North East Hertfordshire constituency rivers in the last year alone. I will be supporting the Bill and working with local water company, Affinity Water, to improve the quality of our beloved rivers

October 2020 - I attended the Chalk Stream Action Groups (CRAG) virtual chalk stream summit, listening to a variety of speakers talking passionately about chalk streams and the issue of over abstraction. Good next steps outlined and the new chair of CRAG has a good vision for the groups progress.

October 2020 - I welcome the news of a new river restoration project happening for the River Beane at Walkern Road Bridge.

The project, which is being run by Affinity Water’s Environmental Enhancement Team, is exploring options to overcome the barrier to fish passage that the bridge creates on the River Beane at Watton-At-Stone. This barrier is currently preventing common underwater wildlife in healthy chalk streams, such as brown trout, grayling and freshwater shrimp from gaining passage down the river.

I welcome the initiative to help restore the River Beane back to becoming a healthy chalk stream. I have campaigned for many years on the issue of over abstraction of chalk streams, including the River Beane, so am delighted that Affinity Water have set up the project.

October 2020 - I was glad to hear that on World Rivers Day (27 September), Affinity Water were able to turn off two major groundwater abstraction sites near the River Chess and have announced that they will end all unsustainable abstraction from chalk groundwater sources.  This will be of interest to our All-Party Group.  I was also pleased to see that there are plans to further reduce abstraction on the River Mimram.

September 2020 - I have set up a new All-Party Parliamentary Group with Broxbourne MP Charles Walker to fight for better river quality in chalk streams and less damaging abstraction. Charles and I have, for many years, campaigned on chalk stream issues. The North East Herts constituency includes eight chalk streams and abstraction on the Rivers Beane and Mimram has been reduced as a result of their efforts.

The inaugural meeting of the Group was held on 15 September. Charles Walker was elected as Chairman, and I as Vice Chairman. Other Hertfordshire MPs involved were Julie Marson MP for Hertford & Stortford and Daisy Cooper Lib Dem MP for St Albans.

The meeting was attended by more than 20 Members of Parliament. It was a very good meeting with a lot of enthusiasm from MPs to try and improve the quality of our streams. The first step will be to meet the Minister to press the case for our chalk streams.

July 2020 - I have received the attached letter from the Department for Environment and Rural Affairs regarding Chalk Stream extraction.

February 2020 – I visited the River Beane and River Mimram today and was delighted at the high water levels in both rivers. I have previously raised the issue of water levels in the House of Commons and with Environment Agency and Affinity Water.

Commenting Oliver said "It is great to see both the River Beane and Mimram with such high water levels. After our effective campaigning a solution has been found to allow for our environment to go on unaffected."

October 2019 – I spoke in the debate on restoring nature. I praised the work of the National Trust at Wicken Fen and in expanding wetlands towards Anglesey Abbey at Lode. I highlighted the need for a water policy to ensure peat was wet and thereby captured carbon and called for a policy to protect chalk streams from running dry.

October 2019 - Met with Jake Rigg, Director of Affinity Water, to press the case for less abstraction from chalk streams.

September 2019 - I have been approached by constituents in Baldock and Radwell about the lack of water in Ivel Springs. This is an issue that I have been taking up with the Environment Agency and Affinity Water for some months.  I have also raised this is the House of Commons in a recent debate.  I am pressing for works to be undertaken to bring water back to the springs and understand that Affinity Water have now designed a scheme. I am continuing to push for the works to be done, as is County Councillor Michael Muir.

September 2019 – I am delighted to have been made President of the campaign to protect the River Rib. I am pressing the Environment Agency for an assessment of the state of our chalk streams, including Ivel Springs in Baldock.

July 2019 -  I spoke in the debate on Degraded Chalk Streams.

As you will see, the Minister referred to my long-standing campaign to improve the quality of chalk streams in Hertfordshire and more generally. There were also some other very good speeches in the debate.

July 2019 - I am taking up concerns about current water levels at Ivel Springs, Baldock, with Affinity Water and the Environment Agency.

April 2018 – I sponsored the launch at Parliament of a major report ‘Saving the earth – a sustainable future for soils and water’ jointly compiled by the Angling Trust, WWF-UK and The Rivers Trust, recommending a radical new approach to managing the countryside to prevent soil erosion, flooding and pollution, which are damaging our rivers and threatening our wildlife and economy. There was good support from MPs including the Minister of State at DEFRA. This link includes a clip of me explaining the importance of the campaign https://tinyurl.com/yaxgbnhm

October 2017 – I attended an exhibition at Parliament backing the WWF campaign on river quality ‘I want my river flowing’ which supports river quality improvements.  I have campaigned long and hard to improve river flow in the seven chalk streams of North East Hertfordshire and agreements have been reached to reduce abstraction on the Rivers Beane and Mimram. It is important that we should value our chalk streams which are such an important part of the North East Hertfordshire environment and I will continue to press the case.

June 2016 - I visited Tewinbury Nature Reserve to highlight the work that is needed to preserve the River Mimram and the wealth of biodiversity that it supports. It was fascinating to see the work being done by the Herts and Middlesex Wildlife Trust, and it was good to see the Reserve in such good condition, thanks to the work of the warden, Robin Cole, and his team.

15 December 2015 - I received a reply to my Written Parliamentary Question on improving physical habitats in Hertfordshire’s chalk rivers. I am glad to see the £3m investment for habitat improvement, and the success in previous schemes is encouraging.

14 December 2015 - I received a reply to my Written Parliamentary Question on phosphate pollution levels in Hertfordshire’s chalk rivers. I am glad that the levels are remaining stable, and I am hopeful for reductions over the coming years.

22 June 2015 - I received an answer to a Written Parliamentary Question that I sent to the DEFRA Minister, updating me on progress that has been made in improving local chalk streams.

20th March 2015 - I visited the River Beane at White Hall, and was pleased to see that the river was flowing well.

18th February 2015 – I recently called on the Environment Agency for a briefing about the water quality and native wildlife of the River Ivel. It is found below. I am soon to visit the source in Baldock to hear local concerns.

25 November 2014 - I helped launch a WWF/Coca Cola Report into the condition of England’s chalk streams. The report calls on the Government to make the preservation of chalk streams a national priority, to reform the process of water abstraction licensing, and regularly to report to the House of Commons on progress. Here is a link to my Parliamentary Question to the DEFRA Secretary about the report.