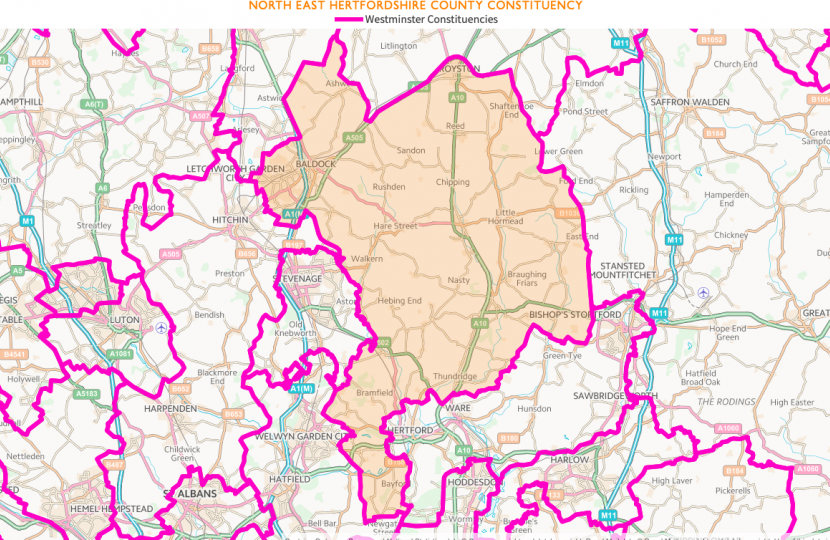 (Photo is from the Ordnance Survey's collection of election maps)

To the north are the four towns: Letchworth Garden City, Baldock, Royston and Buntingford. The Constituency stretches to the south, down the A10 as far as Thundridge, before proceeding further south to Tewin and the Five Greens, but missing out Hertford and Ware. The Constituency includes large villages, such as Watton-at-Stone, Standon, Puckeridge, Bayford, Little Berkamsted, Walkern, Ashwell, Weston and Sandon, as well as many smaller villages.

The four towns in the Constituency have many small to medium sized research-based high technology companies, and the area is also a centre for light engineering. The largest business employer is Johnson Matthey, the precious metals and auto catalyst group based in Royston.

Letchworth Garden City is the world's First Garden City and was established by Ebenezer Howard in 1903. It continues to attract interest around the world as an example of town planning. Royston, Baldock and Buntingford are ancient market towns, with many historic buildings. Royston is famous for its mediaeval Cave attributed to the Knights Templar and also has racing stables on Therfield Heath.

The large agricultural area of the Constituency is made up mainly of arable land, but there are sheep breeders to the south and some dairy and pig units.

Many constituents use the regular train services to King's Cross in order to commute to work in London. There are also important road links with the A1(M), the M11 and the A505.