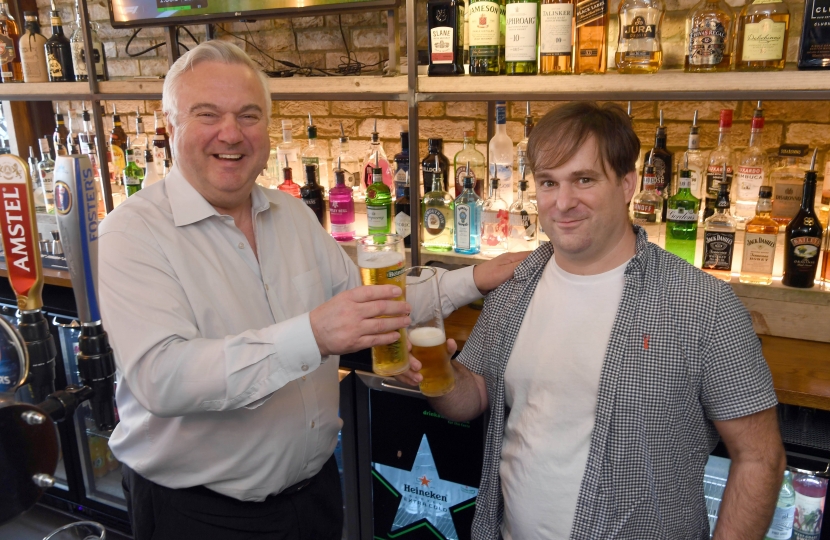 Sir Oliver Heald, MP for North East Hertfordshire, visited The Green Man on Market Hill in Royston on 28 June to toast the success of a £220,000 refurbishment by licensees Andy Murray and Kerry Howells and Heineken-owned Star Pubs & Bars.

The investment has sympathetically restored the grade II listed, 200-year-old pub and created a stunning year-round garden complete with table tennis. The Green Man is now a top spot for watching sports thanks to a new sound system and six big screens. Andy and Kerry have also introduced barista coffee and extended their menu with homemade waffles and smoked wings and ribs as specialties.

Says Sir Oliver Heald: “Good pubs not only play an important social role but are vital to the success and appeal of the county’s town centres. It’s great to see this scale of investment in a local pub; it takes The Green Man to another level and enhances the whole neighbourhood.”

Comments Andy, who grew up in Royston and has run the pub for the last six years: “The Green Man is part of Royston’s history; we want to preserve it for future generations. The revamp has given it a new lease of life and broadened its appeal. We’ve been overwhelmed by local residents’ support and feedback and we’re seeing lots of new faces.”

Adds Matt Cornwell, Star Pubs & Bars area manager: ““We’re delighted that The Green Man’s refurbishment has been so well received. Andy and Kerry have done a fantastic job and given people lots more reasons to visit.”