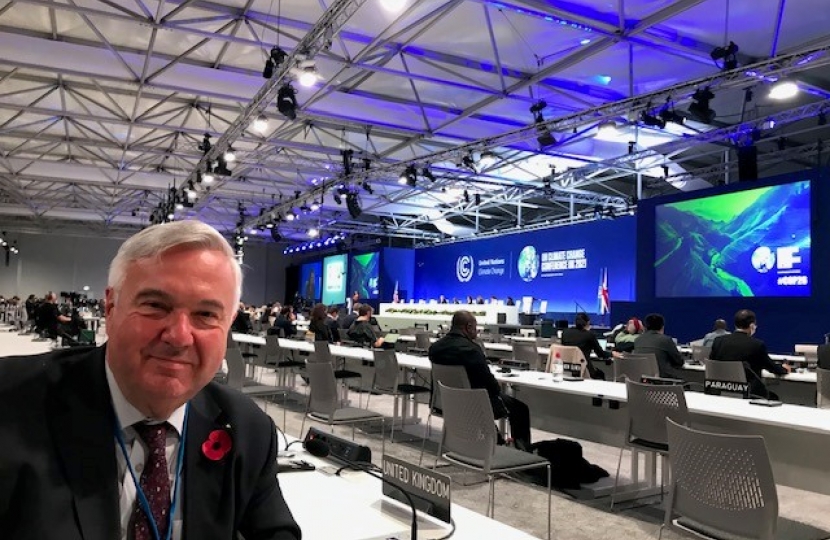 North East Herts MP Oliver Heald was a member of the UK delegation to COP26 in Glasgow and was able to greet visiting speakers and attend plenary at the UK desk, where he heard the speeches by Ellie Goulding, Idris Elba, his wife Sabrina and leading politicians including Environment Ministers from around the World and Theresa May, who started the preparations for COP26.

Oliver travelled up to Glasgow (by train) as part of the UK team for Nature Day on Saturday 6th November, where the main topic was how to use nature based solutions to tackle biodiversity loss and climate change.

Oliver attended a number of events in the Presidency British Pavilion including where he was able to greet various panels dealing with nature-based approaches to climate change from planting mangroves in Gambia to grazing cattle in Scottish woodland to replanting coral.

He also attended plenary in the main hall for sessions on sustainable farming - using regenerative agriculture to how best to help small farmers in dry areas of the World. In every session there were fine examples of good practice in the UK from restoring peat bogs to reforesting to restoring salt marshes.

Oliver also attended events held in the French Pavilion and the Chinese Corporate Pavilion, where the National Trust hosted an event for the International Organisation of National Trusts, which has 8 million members. They highlighted a French programme to teach sustainable building and restoration techniques such as the use of lime mortars and washes, the campaign to reduce deforestation in Australia and work on various projects in the UK, as well as protecting Irish peat bogs.

“ It was an honour to be selected as a member of the British Delegation to COP 26 and to take part in so many events on Nature Day. Climate Change is an emergency and one we can tackle. It was also good to hear from committed UN Ambassadors on Climate Change such as Idris Elba and his wife Sabrina and also to hear Ellie Goulding, as well as all the leading political figures such as Ministers and experts from around the World and our own Ministers such as Zac Goldsmith and George Eustice MP, DEFRA Secretary of State.

It was marvellous to see the enthusiasm from across the World to tackle climate change and that although nature-based solutions vary from country to country, they all use the tools nature has given to the World to tackle climate change whether it is restoring peat bogs, creating salt marshes or reforesting or planting mangroves and new coral. I left very hopeful of even more positive announcements from this landmark conference. I was also proud that Hertfordshire is taking action through initiatives to increase woodland and protect its habitats, for example at the Hertwood at Sandridge, a Woodland Trust initiative, and through organisations such as Baldock Rotary, our river organisations and the Herts and Middlesex Wildlife Trust. ”