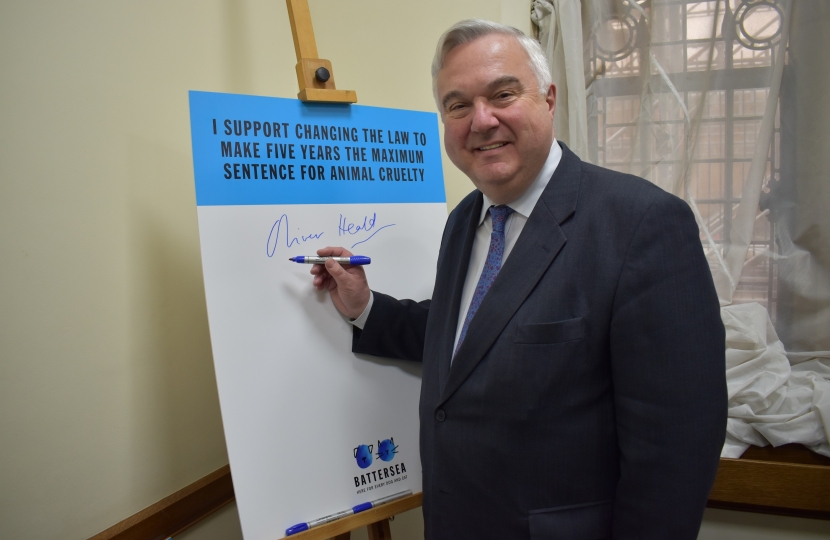 North East Herts MP Oliver Heald was delighted to attend Battersea’s reception on Wednesday 12 February to show support for changing the law to increase the maximum sentences for animal cruelty.

Currently, Courts in England & Wales can only punish the most serious animal cruelty offences with a maximum of up to six months in prison, a banning order and an unlimited fine.

Last week saw the measure return to Parliament, following the introduction of a new Bill to change the law, allowing for sentences to increase to a maximum of five years for animal cruelty offences – something Battersea has been campaigning on since 2017.

The Government has already indicated its intention to support the Bill during its passage through Parliament. This change would provide the justice system with the flexibility to treat the most shocking acts of animal cruelty much more seriously than it can at present.

April, a Staffordshire Bull Terrier, was brought into Battersea late at night after a police officer found her alone on a freezing London street. She had an infected wound on her muzzle where her mouth had clearly been taped or wired shut. Following months of surgeries, April made a full recovery and eventually found a loving home. Unfortunately, not all dogs and cats are as lucky as April.

At the reception, Oliver Heald added his signature to a pledge board to underline their support for the change to the legislation.  Commenting, Oliver Heald said: “It’s critically important that we change the law to better protect animals in the future. The current maximum penalty is neither a punishment nor a deterrent to offenders and this change is long overdue. I’m proud to support this Bill and Battersea’s campaign.”

Northern Ireland already has sentences of up to five years, and the Scottish Government is currently legislating for five-year sentences.

MP continues to press the case about Morrisons in Royston

North East Herts MP Oliver Heald has had three meetings with Morrisons including with CEO Mr David Potts.  In his discussion with senior Morrisons executives on Friday 18 September Oliver continued to press the case for the store and highlighted the support in the town shown by petitions and stat