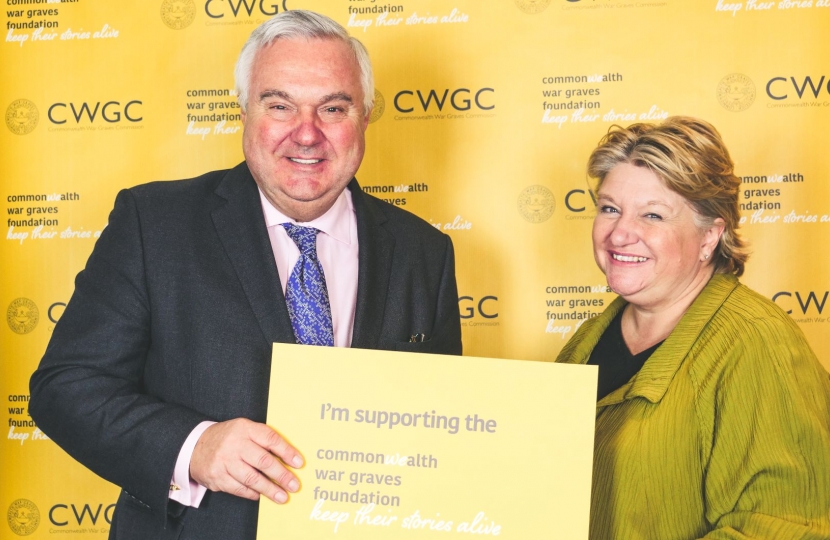 Sir Oliver Heald, MP for North East Hertfordshire, is urging constituents to learn more about their community’s connection to the First and Second World Wars by engaging with the Commonwealth War Graves Commission (CWGC) sites on their doorstep.

CWGC looks after the graves and memorials to the 1.7 million Commonwealth men and women who died serving in the two World Wars. More than 306,000 of those who gave their lives are commemorated on British soil, including 170,000 burials and Sir Oliver Heald and the Commission are encouraging local residents to keep their stories alive.

In almost every city, town and village in the country there lies a war hero who will be commemorated in perpetuity by CWGC. A simple search on the Commission’s website (www.cwgc.org) can reveal just how many of those who died in the conflicts found their final resting place in your home town. Anyone can support the Commission’s work to remember the war dead by joining as a supporter of the Commonwealth War Graves Foundation and help to fund educational outreach work to engage the next generation.

Sir Oliver Heald said: “Almost every family in the country has a story or connection that links them personally to the First and Second World Wars but not everyone knows about those who are commemorated in their home town. It’s astounding to think that wherever you go in the UK you are rarely far away from a poignant reminder of the sacrifice made by the generations before us and North East Hertfordshire is no exception.

“I would encourage those who live and work in North East Hertfordshire to search on the Commonwealth War Graves Commission’s website and learn more about those who made the ultimate sacrifice in the two World Wars. You never know, you may even make a connection to your own family history that had been forgotten. I’m proud to support the Commonwealth War Graves Foundation’s work to ensure the next generation continues to learn about those who died in two World Wars and keep their memory alive.”

The CWGC has a commitment to commemorate the war dead in perpetuity and its charity arm, the Commonwealth War Graves Foundation (CWGF), offers supporters a chance to give back to those who gave their lives in the conflicts by helping to teach young people about those who died in the two World Wars.

CWGF runs an educational programme that teaches the next generations about the cost of war and funds the successful intern programme that offers young people the chance to work at some of the Commission’s most well-known sites in France and Belgium and engage with visitors from around the world about the war dead from the Commonwealth.

Max Dutton, assistant historian at CWGC, said: “CWGC has more than 13,000 locations in the UK, ranging from military cemeteries and churchyard burials to single headstones on remote Scottish islands. Every single one of those 306,000 men and women died in service to their country and we are here to commemorate them in perpetuity. It is always touching to see a local community engage with the stories of the war dead commemorated in their area. Some of the projects on which towns and villages have embarked show that our joint commitment to remember them will continue.

To increase awareness of the war dead buried and commemorated in the UK, CWGC is in the process of installing signs outside thousands of churchyards, cemeteries and burial grounds. The signs highlight where there is a Commonwealth War Grave and to date more than 3,500 have been installed across the UK, with thousands more pending.

Get to know the Commonwealth War Graves Commission