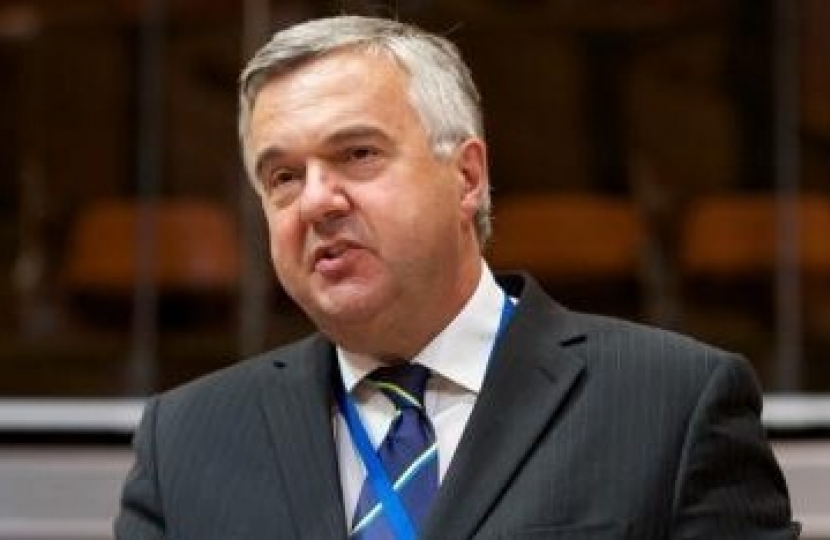 I was first elected as Member of Parliament in 1992 and have lived in the Constituency at Royston since 1981. I am married to Christine and we have three children: Sarah, William and Victoria.

I was born in Reading and went to Pembroke College, Cambridge, where I studied Law. It was while training as a barrister that I ran a Southwark youth football team with Clive Efford (now a Labour MP) and started doing free legal work for the Free Representation Unit, which instilled a long-term interest in social and employment issues.

I practised as a barrister for over twenty years. In the late 1970s I was a speaker with the Hyde Park Tories, the only major political Party to have a presence at Speakers' Corner. In the General Election of 1987, I was the Conservative Candidate for Southwark and Bermondsey and in 1992 I succeeded Ian Stewart as MP for North Hertfordshire (as it then was).

In 1994 I was appointed Parliamentary Private Secretary to the Rt Hon William Waldegrave MP and also successfully piloted a Private Member's Bill through Parliament to help the insurance industry reduce premiums.

In 1995, I was appointed as a Minister in the Department of Social Security, leading the Government's campaign against benefit fraud. In 1996 I introduced legislation to provide greater powers to benefit fraud investigators. I was also the Junior Minister dealing with pension issues.

After the General Election of 1997, I spent a period in the Opposition Whips' Office, and spoke from the Front Bench on the Devolution Bills. Early in 2000, I was appointed Shadow Home Affairs Spokesman arguing for more PCs and less paperwork. In September 2001, I was appointed as Shadow Health Minister and held a major Mental Health Summit at Westminster.

In November 2002, I entered the Shadow Cabinet as Shadow Minister for Work and Pensions, working on proposals for a Lifetime Savings Account and publishing “Auditing the New Deal: What Figures for the Future”(Politeia). In November 2003, I was appointed Shadow Leader of the House a position I held until May 2005, successfully pressing for better parliamentary education facilities and improved House of Commons Security. In addition, in September 2004, I became Shadow Secretary of State for Constitutional Affairs arguing for tougher measures to deter Electoral Fraud. In December 2005 David Cameron asked me to take on the role of Shadow Chancellor of the Duchy of Lancaster in addition to continuing as Shadow Secretary of State for Constitutional Affairs. This led to me spending an eye-opening week in a Homeless Hostel in Sheffield (St Anne’s, Bevan Court) as part of Iain Duncan Smith’s Social Justice research.

In July 2007 I returned to the back benches after 13 years’ continuous service on the Conservative Front Bench.

In September 2012 I returned to Government when appointed Her Majesty's Solicitor General for England and Wales. In this role, I helped oversee a modernisation of the Criminal Justice System with new digital working. I also presented and won all my cases in the Court of Appeal for unduly lenient sentences and I argued successfully in Government for tightening of the laws on Female Genital Mutilation. I helped steer two Bills through the House of Commons – the Crime and Courts Act 2013 and the Deregulation Act.

I left the Government in the 2014 reshuffle and was honoured by the Queen for my political service over the past 22 years. From October to December 2014, I sat on the Select Committee on Governance of the House of Commons, which prepared a report on the future shape of the senior management structure of the House.

In July 2016, I returned to Government when the new Prime Minister, Theresa May, appointed me as Minister of State for Courts and Justice, enabling me to continue to work on the modernisation of the Courts.

In October 2016, I was appointed to the Privy Council and may therefore use the title The Right Honourable.

In June 2017, I was re-elected with an increased percentage of the vote.

In June 2017 I returned to the backbenches.

Throughout my time as an MP, my focus has been on representing everyone in North East Herts.

In December 2017 I was given permission by the House of Commons to introduce a Bill on service animals known as Finn’s Law.  The Bill went through and is now an Act.

In March 2018 I was appointed to the Independent High-Level Commission on Sexual Misconduct, Accountability and Culture Change at Oxfam, which is looking into events involving the Charity’s staff in Haiti.

In December 2019, I was re-elected with an increased majority.

In February 2020, I was elected a member of the Committee on Regulatory Reform.

In January 2022, I was appointed by the Prime Minister as Co-chair of the UK-EU Parliamentary Partnership Assembly. The other Co-chair is Nathalie Loiseau MEP. From January 2021, I had been the House of Commons Lead in setting up the Assembly with Lord Kinnoull acting on behalf of the House of Lords.