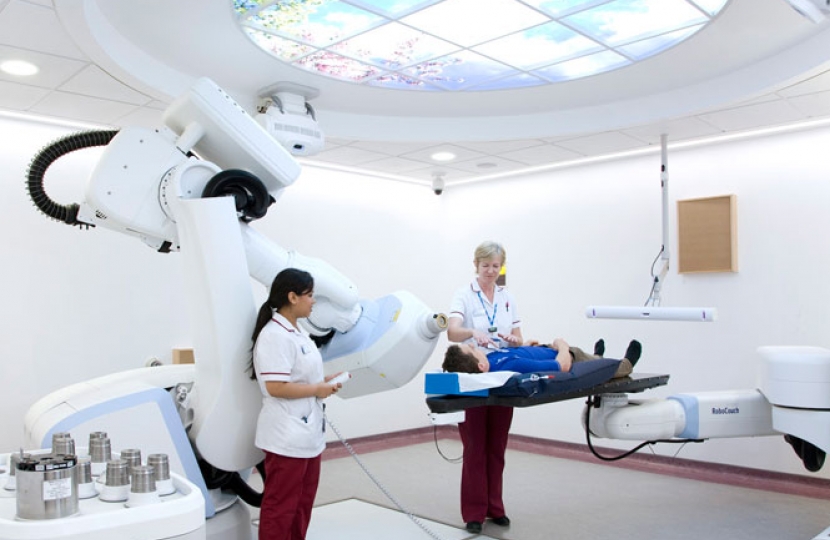 Cancer is one of the most serious diseases and, as such, must be treated effectively and in a way that does not place the patient under undue stress and difficulty. Radiotherapy is used in the treatment of nearly half of all cancer patients, but the people of North-East Hertfordshire find it difficult to access these services, owing to the long journeys required to get to them.

The nearest radiotherapy facilities are in Mount Vernon Hospital in Hillingdon and Addenbrookes Hospital in Cambridge. In order to prevent patients in North-East Hertfordshire from having to undertake these long trips – many of which have to be taken on consecutive days – I have launched a campaign to put pressure on NHS England to provide a satellite radiotherapy service in Lister Hospital in Stevenage. You can track the progress on my campaign below.

Things we have done so far.

3 January 2023 - I have pressed Ministers to support the Mount Vernon rebuild at Watford and the  radiotherapy satellite in North Hertfordshire.

19 April 2021 - Here is the latest letter which Oliver has received about the Mount Vernon Satellite Centre review:

The next phase of the Mount Vernon Cancer Services Review patient, public and stakeholder engagement will be starting this month, and offers opportunities for interested stakeholders to join a series of Work Groups that will take a more detailed look at areas of particular concern highlighted in recent focus groups and events. These key topics include –

Brief details of all 11 groups can be found on the attached flyer, and full details, including how to register, are on the website

The first dates for each group have been announced – further dates will follow. If you are unable to attend the initial meeting, that does not mean you cannot join future sessions when announced. Register your interest to ensure you receive invitations to future sessions.

We rely on our system partners to help us reach widely into the community, and in addition to considering whether you or someone from your office would like to be involved, I would be grateful if you could forward the attached flyer and website link to colleagues and relevant partners.

16 March 2021 - I wrote to Sir Paul Burstow, Independent Chairman of the Hertfordshire & West Essex ICS explaining my campaign for a satellite radiotherapy centre at Stevenage in recognition of the terrible patient experience of travelling from our area of North East Hertfordshire to Mount Vernon in Hillingdon day after day while suffering from cancer.

15 October 2020 - Great news from NHS England highlighting the engagement process about where a satellite radiotherapy centre should be. The NHS England Engagement Team are hosting a series of virtual meetings during October and November. The document attached below (titled 'Engagement update') shows links to Eventbrite to reserve a place.

I hope constituents will respond and volunteer to join the engagement process. We have waited so long for a satellite radiotherapy centre and this is an important step on the way. Stephen McPartland MP has also added: “Our campaign for a Satellite Radiotherapy Unit in Stevenage continues to move forward and we need local people to ensure their voices are heard loud and clear. Please join the Satellite Radiotherapy Group and help us persuade NHS England that this facility is a priority for patients and their families.”

14 October 2020 - I have received a response from Nick Carver at the East & North Herts NHS Trust with an update on the Radiotherapy facility. The letter is attached below.

5 October 2020 - I have written to NIck Carver at the East & North Herts NHS Trust requesting an update and offering my help with any action required.

18 October 2019 - I met Lister Chief Executive Nick Carver to discuss the Clinical Review of Mount Vernon Hospital. As well as outlining the problems with the Mount Vernon site, the review recommended a satellite radiotherapy facility for Hertfordshire residents. This strengthens the case for a satellite radiotherapy centre at the Lister Hospital. Although the Clinical Review was very critical of the facilities at the Mount Vernon and highlighted a need for change, one piece of good news was the recommendation for a satellite radiotherapy facility in our area. I have been pressing for this with other MPs, including Stephen McPartland, and hopefully this means that action will be taken before too long.

Nick Carver said, “We strongly support the recommendation that there should be a satellite radiotherapy facility for Hertfordshire and ideally it would be on the Lister site.”

The East & North Herts NHS Trust has confirmed that it will be bidding for funding in the next wave of STP funds.

July 2019 – I have received a Clinical Review Report from Commissioners looking at Mount Vernon Cancer Centre. Both main recommendations include a preference for a satellite radiotherapy centre in the northern part of their catchment. This seems encouraging.

July 2019 – I pressed the case with the Secretary of State, together with Stevenage MP Stephen McPartland, for funding of a satellite radiotherapy centre.

June 2019 - I wrote to CEO Nick Carver at the Lister to ask for an update on radiotherapy plans. His reply is attached at the bottom of this page.

June 2018 - I called in the House of Commons on Health Secretary Jeremy Hunt MP to consider the campaign by Hertfordshire MPs for funding for a radiotherapy facility in the County.

June 2018 - I have given my support to the attached letter from Stephen McPartland MP to Dr Rory Harvey (see below) and I look forward to seeing the formal response.

May 2018 - I have recently met Dr Rory Harvey of the East of England Cancer Alliance together with Stephen McPartland MP to discuss improving the patient experience and access issues. I am strongly supportive of attempts to improve cancer waits locally and provide radiotherapy in our area. This meeting follows an earlier meeting with the Board of the E&N Herts NHS Trust to press for action to help patients.

April 2017 - I had a good meeting with Nick Carver CEO of Lister Hospital. There has been real progress in planning for a radiotherapy facility in Stevenage.

January 2016 - I am arranging a meeting with Accountable Commissioner Kim Fell and other representatives from NHS England to discuss the findings of the radiotherapy capacity and demand survey, which is nearing completion.

June 2015 – I have received confirmation that the radiotherapy providers in the East of England are completing a Capacity and Demand Survey which will be returned to the Regional Team by 26th June. NHS England’s priorities for 2015/16 are to be published within the next few weeks, and this will include the subject of radiotherapy.

March 2015 - The Government has given a response to the Petition that I presented to the House earlier this month. It is attached below. I am pleased that Ministers are actively considering the situation in Hertfordshire.

March 2015 - I welcome the progress made at a meeting today with NHS England, Stephen Mc Partland MP, and a Consultant Surgeon from the Lister. See the press release here.

March 2015 - To test NHS England's claim that the journey from Letchworth to Mount Vernon Hospital in London can be done in 45 minutes, I have so far completed three journeys. Leaving LGC at 8am, it took 1 hour 25 minutes and, even at midday, it took almost an hour.

March 2015 - I presented the petition to the House of Commons with a total of 4,211 signatures. Read the press release here and watch the presentation here.

February 2015 - I led a debate in Parliament on the provision of radiotherapy services in North-East Hertfordshire, in which I called upon the Health Minister to press NHS England to consider the difficulties suffered by cancer patients in the constituency.

January 2015 - In the chamber, I called on the Leader of the House of Commons to provide Parliamentary time for a debate on radiotherapy services. Find out more here.

January 2015 - Here is a link to my Press Release about my petition for a Satellite Radiotherapy Centre at The Lister Hospital http://www.oliverheald.com/news/sir-oliver-heald-campaigns-satellite-radiotherapy-centre-lister-hospital

December 2014 - Here are links to three Written Parliamentary Questions I asked the Health Department at the start of my campaign, outlining the difficulty that the people in North East Hertfordshire have in accessing radiotherapy services: