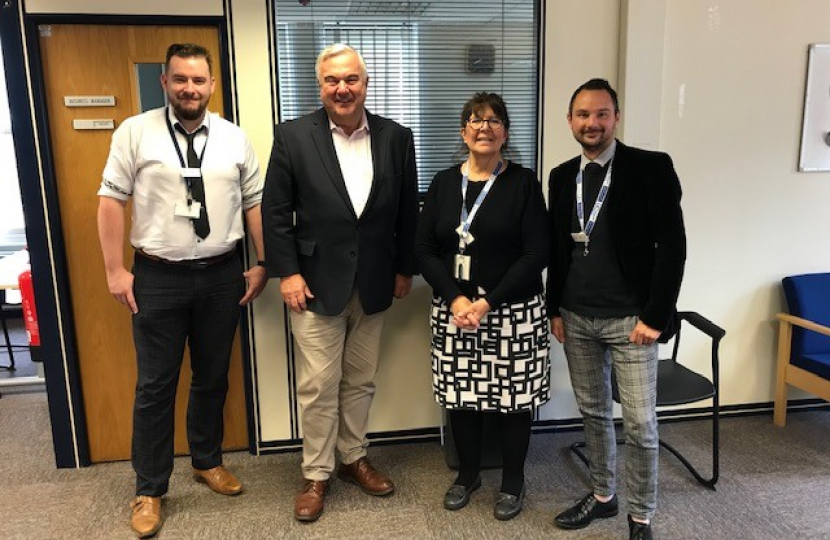 North East Herts MP Oliver Heald visited Letchworth DWP Job Trainers at their Station Road base at The Peoples House to hear the latest news on filling job vacancies.  He was told about the schemes to help people into jobs including for those with disabilities and of the large number of vacancies in sectors such as care, driving jobs, hospitality and retail. Letchworth is one of the best in the Herts/Beds region in placing clients in work.

Oliver was able to meet the trainers and other staff dedicated to helping people find jobs. James Kelly, Work Coach Team Leader introduced Oliver to the team and was able to hear of many successes helping young people through the Kickstart scheme and older workers with particular skills such as in the theatre and film industries. Oliver also met Team Leader Chris Davis-Green and Jackie Merry, Customer Services Lead, who often helps Oliver's constituents with casework issues raised with the MP. The District Operations Manager Graham Gillett for Herts/Beds also came to emphasise the excellence of Letchworth's team.

Commenting Oliver said: " It was good to hear this success story at The People's House in Letchworth with the Job trainers helping so many to make their job vision a reality, particularly in the very buoyant job market. I thank everybody involved for doing so much to help my constituents."

North East Hertfordshire MP Sir Oliver Heald took time out recently (November 25) to see the investment being made to bring ultrafast broadband to more than 2,800 homes and businesses in Buntingford.