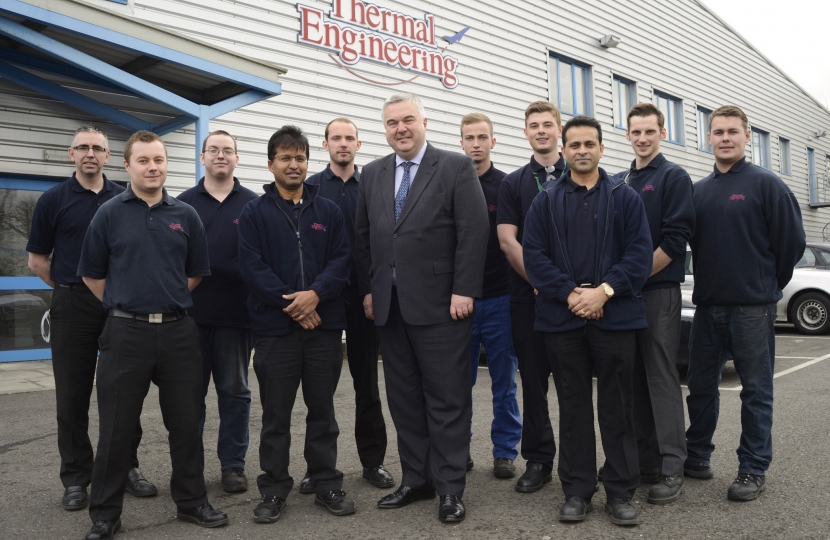 During National Apprenticeship Week, North East Herts MP Oliver Heald has supported the Prime Minister’s vision for it to become the new norm for young people to either go to university or start an apprenticeship.

Across North East Hertfordshire six hundred people started apprenticeships in the academic year 2011-12, and another two hundred have started in the first quarter of this academic year. This is a percentage increase of 107% compared to Labour’s last year in office.

This comes as the Centre for Economics and Business Research (CEBR) have released a forecast that apprenticeships completed over the next decade could contribute productivity gains worth up to £3.4 billion a year to the economy by 2022.

Commenting, Oliver Heald said, “Conservatives in Government are investing in apprenticeships to ensure that the country has the skills it needs to compete in the world and people across North East Hertfordshire are benefitting from this. I know from work that I have seen at Thermal Engineering, whom I visited recently in Royston, that apprenticeships are a win for the individual and a win for the business.

“National Apprenticeship this week provides a great opportunity to celebrate the positive impact that apprenticeships have on individuals, businesses and the economy.”

Prime Minister David Cameron said: “Apprenticeships are at the heart of our mission to rebuild the economy, giving young people the chance to learn a trade, to build their careers, and create a truly world-class, high-skilled workforce that can compete and thrive in the fierce global race we are in.

“There are record numbers of people taking up an apprenticeship, with a million starting one in the last few years. And as we take forward the Richard Review, our drive to reform and strengthen apprenticeships, raising standards and making them more rigorous and responsive to the needs of employers - means that an apprenticeship is increasingly seen as a first choice career move.

“But we need to challenge ourselves to go even further - that is why I want it to be the new norm for young people to either go to university or into an apprenticeship. We need to look at how we can expand apprenticeship opportunities so that they are available to all young people who are ready and eager to take them up, and aspire to get ahead in life.”

The photograph above shows Oliver with Apprentices during his recent visit to Thermal Engineering in Royston.